Pinnacle Solutions ready to offer IT services to U.S. federal agencies under VETS 2 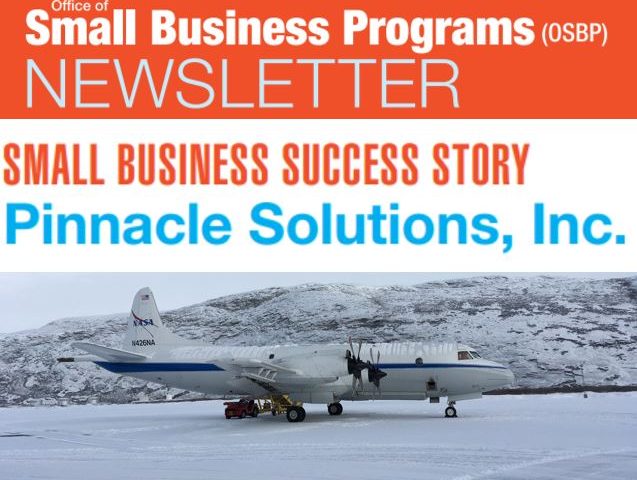 To read the interview in its original format please click here.

Pinnacle Solutions, Inc. is a Service-Disabled, Veteran-Owned Small Business from Huntsville, AL, that will soon celebrate its 10-year anniversary in February 2018. Just prior to that milestone, Pinnacle will also have just completed 3 years of successful Prime Contractor support to NASA’s Goddard Space Flight Center’s Wallops Flight Facility (WFF) on the Aircraft Maintenance and Operations Contract (AMOC). Without question, it has been an exciting 3 years of excellent cooperation with the Aircraft Office at WFF as Pinnacle supported NASA flight operations in 11 international locations including Greenland, Norway, Canada, Newfoundland, Sao Tome and Principe, Namibia, Antarctica, Barbados, Ascension Island, New Zealand, and Argentina, as well as 11 domestic locations throughout the continental United States as part of NASA’s Airborne Science Program.

Within the first 30 days of joining the NASA team and assuming duties as the NASA AMOC Prime Contractor, Pinnacle seamlessly transitioned 94% of the incumbent workforce, inventoried more than $80 million-worth of government property, and assumed all program and project management functions under AMOC. Since then, no matter the location or weather, Pinnacle has responded to long-term, short-notice, and rapidly changing mission requirements, all the while ensuring the Team remained focused on executing their missions in accordance with one of the company’s six core values: “Operational Efficiency!” NASA aircraft at Thule Air Base in Greenland.

The Pinnacle Team dedicated to this program consists of qualified, trained, and certified aircrews, subject-matter experts, IT engineers, logisticians, and aircraft maintenance technicians who provide continuous support and execute tasks ranging from minor aircraft modifications to major aircraft re-engineering efforts. The team coordinates aircraft availability based on mission requirements and scheduled maintenance; the availability of flight crews and technicians to install, test, and troubleshoot experimenter systems; and a full complement of mechanic, avionics technician, Aviation Ground Support Equipment (AGSE), Aviation Life Support Equipment (ALSE), and IT support for all required project and mission test flights. Pinnacle’s on-site AMOC logisticians also perform multiple duties, including procurement, while the corporate office provides reach-back capability to support procurements during times of increased deployment activity to ensure mission success. These combined efforts have resulted in a year-to-date Full Mission Capable rate of 93.3% and are excellent examples of one of Pinnacle’s most important values: “Quality Products Delivered on Time.”

Recently, Airfield Operations support was added to Pinnacle’s contract, which required the company to hire an assistant airfield manager and four control tower operators. While very closely tied to the aircraft side of the operation, and in the very short time their airfield team has been in place, Pinnacle has already experience successes in this new area of operation by supporting the Blue Angels, F-22, and A-10 aircraft for the Ocean City Air Show, as well as the largest Field Carrier Landing Practice (FCLP) operation ever accomplished at WFF. Finally, on October 2 [2017], aircraft fueling [was] added to the list of Pinnacle’s responsibilities, supporting NASA, DOD, and Project aircraft. This diversity has only proven to further strengthen Pinnacle’s and NASA’s communication and working relationships across the airfield and aircraft office.

At Pinnacle, the company’s leadership strives to ensure that its personnel are great at what they do and make certain to offer a safe and enjoyable work environment. Since becoming the Prime Contractor on AMOC, Pinnacle has introduced several safety improvements, including the Fall Arrest System by Ark Safety—a one-of-a-kind fall protection system inside WFF’s hangars—and a Wasp barcode tracking system for tool accountability, just to name a few. Pinnacle’s efforts to improve the safety of its personnel, equipment, and operations at the WFF have not gone unnoticed by NASA. Pinnacle is very proud of the recognition it has received over the past 3 years, which includes the 2017 NASA Airborne Sciences Contractor of the Year award presented to David Stiles, Pinnacle’s Contract Maintenance Manager; the Robert H. Goddard Exceptional Achievement Customer Service Team award presented for NAAMES 2016 Support; the NASA Airborne Science Program Exceptional Achievement award presented to the ACT-America C-130 Bird Strike Recovery Team; the NASA 2016 Team Safety Award & Individual Safety Award presented for the efforts to fix a 2016 ORACLES P-3 Fuselage Crack while deployed; and the NASA Exceptional Bravery Medal presented to Michael Singer for demonstrating exemplary and courageous handling of a catastrophic T-34B emergency, directly preventing the loss of human life and Government property.

In addition to the work being performed on the NASA AMOC contract, Pinnacle also provides small business Prime Contractor support for the Office of the Chief Financial Officer (OCFO) and the Project Directorate (PD) office for resource and financial management services for NASA’s Stennis Space Center (SSC) on the Financial, Resources, Program, Planning and Control (FRPP&C) contract. Since 2014, the team at SSC has been providing expertise in all areas of planning, programming, budgeting, and execution (PPBE) including financial operations, budget development, implementation, and integration; quarterly and monthly reporting; status review support; financial system management; trend/forecast formulation and analysis; Technical Task Agreement tracking; and process improvement and assessment.

Additionally, Pinnacle supports its customer in developing annual operating plans for a given fiscal year through meetings with project managers and team members to gather requirements for the upcoming year, including verifying that the requirements were part of the initial PPBE submitted for that execution year. Pinnacle’s analysts compile the data that is received from the contractor(s) and ensures the costs are within budget and work with the appropriate PMs to phase all NASA Direct Costs, as well as the Civil Servant Labor costs for each project. All phasing information is submitted to the OCFO Budget Integration Branch via the Funding Action worksheet. Additionally, Pinnacle supports the annual PPBE process per provided guidance and provides analysis of the cost estimates resulting from PPBE submissions.

As a result of accolades from NASA that characterize its work as “open, honest,” “exceeds expectations,” and “always accurate and well-managed,” as well as the nearly 100% exceptional Contractor Performance Assessment Report (CPAR) ratings, Pinnacle is incredibly proud of the tremendous support its teams at Wallops Flight Facility and Stennis Space Center have provided to their respective customers on the vastly different AMOC and FRPP&C contracts. As a small business Prime Contractor, Pinnacle has gained invaluable experience through the professional relationships it has developed with its NASA customers and looks forward to many more opportunities to support current and new missions!